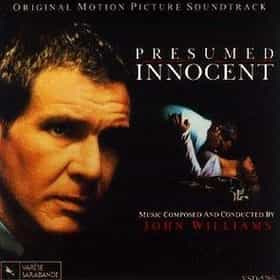 Presumed Innocent is a 1990 legal drama. It is a film adaptation of the best-selling novel of the same name by Scott Turow, which tells the story of a prosecutor and his female colleague and mistress. Directed by Alan J. Pakula, the film stars Harrison Ford, Brian Dennehy, Raúl Juliá, Bonnie Bedelia, Paul Winfield, and Greta Scacchi. It was the eighth highest grossing film of 1990, grossing $221 million worldwide. A sequel, Innocent, was a made-for-TV movie aired as part of TNT's Mystery Movie Night series in December 2011. It featured Bill Pullman in the Ford role, with no one from the original cast. ... more on Wikipedia

Presumed Innocent is ranked on...

Presumed Innocent is also found on...