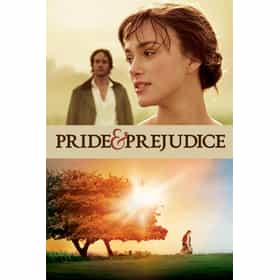 Pride & Prejudice is a 2005 British romance film directed by Joe Wright and based on Jane Austen's novel of the same name, published in 1813. The film depicts five sisters from an English family of landed gentry as they deal with issues of marriage, morality and misconceptions. Keira Knightley stars in the lead role of Elizabeth Bennet, while Matthew Macfadyen plays her romantic interest Mr Darcy. Produced by Working Title Films in association with StudioCanal, the film was released on 16 September 2005 in the United Kingdom and Ireland and on 11 November in the United States. Screenwriter Deborah Moggach initially attempted to make her script as faithful to the novel as possible, ... more on Wikipedia

Pride & Prejudice is ranked on...

Pride & Prejudice is also found on...