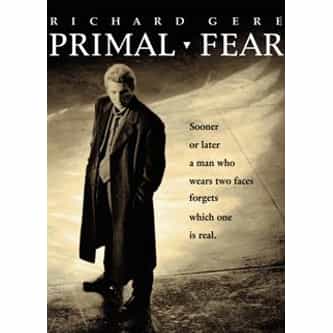 Tagline
Don't believe everything you see...
Sooner or later a man who wears two faces forgets which one is real.

Primal Fear is a 1996 American neo-noir thriller film, based on William Diehl's 1993 novel of the same name and directed by Gregory Hoblit. The film tells the story of Chicago defense attorney who believes his altar boy client is not guilty of ending an influential Catholic Archbishop's life. Primal Fear was a box office success and earned mostly positive reviews, with Edward Norton making a strong showing in his film debut. He was nominated for an Academy Award for Best Supporting Actor ... more on Wikipedia

Primal Fear IS LISTED ON