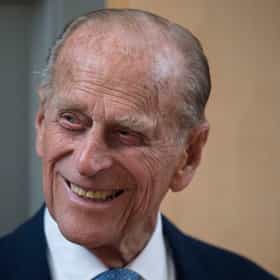 Prince Philip, Duke of Edinburgh (born Prince Philip of Greece and Denmark, 10 June 1921), is the husband of Queen Elizabeth II of the United Kingdom and the other Commonwealth realms. Philip was born into the Greek and Danish royal families. He was born in Greece, but his family was exiled from the country when he was an infant. After being educated in France, Germany and the United Kingdom, he joined the British Royal Navy in 1939, aged 18. From July 1939, he began corresponding with the 13-year-old Princess Elizabeth, whom he had first met in 1934. During the Second World War he served with distinction in the Mediterranean and Pacific Fleets. After the war, Philip was granted ... more on Wikipedia

Did Prince Philip Cheat On Queen Elizabeth Like 'The Crown' Says He Did? 81k views Queen Elizabeth and Prince Philip have been married for 70 years in one of history's longest and most famous royal love matc...
Queen Elizabeth's Husband Might Be The Most Shockingly Biased Royal In Modern History 78.3k views England's royal family are no stranger to scandal and controversy. Princess Margaret's hard-partying ways, Prince Andrew's &...
How A Divorce Scandal Led To Queen Elizabeth II Giving Her Husband A Royal Title 239.2k views Netflix drama The Crown portrayed the ups and downs of the marriage of Philip Mountbatten, Duke of Edinburgh, and Queen Eliz...

Prince Philip, Duke of Edinburgh is ranked on...

#1 of 1,041 Celebrity Death Pool 2020 108.6k VOTES They may be beloved performers, award winners, or game changers, but no matter how famous, you can’t escape death. This cele...
#5 of 30 Every Person Who Married Into The Royal Family In The Last Century, Ranked 538.7k VOTES Royal weddings over the last century have run the gamut. They’ve ranged from quiet partnerships to over-the-top ro...
#12 of 1,445 Celebrity Death Pool 2018 477.7k VOTES Welcome to Celebrity Death Pool 2018! In increasingly uncertain times, there remains one constant in life - we all die. Cele...
#16 of 18 Things That Were A Thing: January 2019 Edition 1.8k VOTES What happened in January? The first month of the year is always rough, but here you will find the most notable January 2019 ...
#16 of 185 Celebrity Death Pool 2014 31.5k VOTES Celebrity death pool 2014: Here's a complete list of celebrities who just might die in 2014. Every year we lose more and mor...
Famous Bilderberg Group Members 63.5k VIEWS List of Famous Bilderberg Members ranked by fame and popularity. The Bilderberg Group is an annual conference comprised of p...
12 Real-Life Royals With Scandal-Plagued Relatives 53.7k VIEWS Just because you're related to royalty - or hold a title yourself - doesn't mean you're immune to embarrassment. Just take P...
What Every Living British Royal Does Today 14.6k VIEWS The British royal family members have become points of pop culture obsession - many of us know them as public figureheads fo...

Prince Philip, Duke of Edinburgh is also found on...