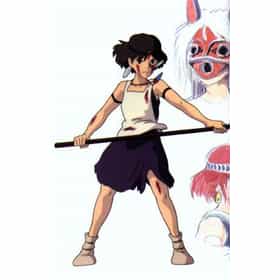 Princess Mononoke is a 1997 anime epic action historical fantasy film written and directed by Hayao Miyazaki. It was animated by Studio Ghibli and produced by Toshio Suzuki. The film stars the voices of Yōji Matsuda, Yuriko Ishida, Yūko Tanaka, Kaoru Kobayashi, Masahiko Nishimura, Akihiro Miwa, Mitsuko Mori and Hisaya Morishige. Princess Mononoke is set in the late Muromachi period of Japan with fantasy elements. The story follows the young Emishi warrior Ashitaka's involvement in a struggle between forest gods and the humans who consume its resources. The term "Mononoke" is not a name, but a Japanese word for a spirit or monster. Princess Mononoke was released in Japan on ... more on Wikipedia

Princess Mononoke is ranked on...

Princess Mononoke is also found on...