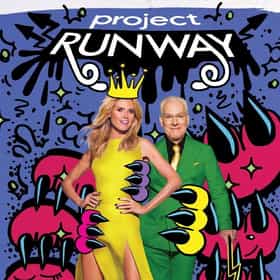 Project Runway is an American reality television series on Lifetime, previously on the Bravo Network, created by Eli Holzman which focuses on fashion design and is hosted by model Heidi Klum. The contestants compete with each other to create the best clothes and are restricted in time, materials and theme. Their designs are judged, and one or more designers are eliminated each week. During each season, selected competitors are progressively eliminated based on the judges' scores until only a few contestants remain; these finalists prepare a complete fashion collection for New York Fashion Week, from which a winner is determined. It won a Peabody Award in 2007 "for using the ... more on Wikipedia

Project Runway is ranked on...

#350 of 779 The Best TV Shows to Binge Watch 1.2M VOTES Bored? Not anymore! These are the best TV shows for binge-watching. The greatest television shows in the world are ranked he...
#871 of 2,297 The Greatest TV Shows Of All Time 1.4M VOTES Choosing the best TV shows of all time means taking into account the best TV dramas, the best TV comedies, the best cartoons...
#47 of 198 People who voted for Project Runway... also upvote Harry Potter Franchise on The Most Rewatchable Movies The Greatest TV Shows for Women 118.4k VOTES Behold, a complete list of the greatest TV shows for women, ranked by ladies who love to watch television! For stay-at-home ...
#14 of 254 People who voted for Project Runway... People under 30 are 2x more likely to vote for this People on the West Coast are 2x more likely to vote for this The Best Reality TV Shows Ever 168.1k VOTES This is a list of the best reality TV shows on television, the most (often shamefully) addictive reality TV series. From g...
#12 of 135 The Best Reality Competition Series 74.6k VOTES The best reality TV competition series, ranked by fans and critics. Reality shows are among the most-watched programs on TV,...
#9 of 44 Reality Shows That Involve Actual Skill 10.5k VOTES Ever come across one of those reality shows that you found strangely addicting, whether or not you’re tend to love or hate r...
#44 of 44 The Best Shows to Marathon on a Plane 9.7k VOTES So, you've got a long plane ride, or multiple plane rides. Or maybe you're not on a plane at all, and you're taking an Amtra...
#29 of 30 What to Watch If You Love 'MasterChef' 116 VOTES MasterChef kept viewers on the edge of their seats as home chefs compete for a $250,000 prize, so it's no surprise that you’...
#69 of 70 The Best TV Shows That Aired in 2012 9k VOTES Now that 2012 is over, which shows stand out from the past year? Which just need to be wrapped up already? Vote now!
#20 of 60 The Best Reality TV Shows In 2019 2.9k VOTES UPDATED: Check out The Best Reality TV Shows of 2020! Not only are there lots of new reality TV shows premiering...
#16 of 24 The Most Exciting Reality Competition Shows in 2019 452 VOTES The most exciting reality competition TV shows new or ongoing in 2019 are some of the most fun and entertaining to watch on ...
#137 of 195 What Shows Do You Most Want on Netflix Streaming? 194.8k VOTES What TV shows do you most want on Netflix streaming? While Netflix does offer some great streaming TV shows, and will likely...
#175 of 476 The Best Television Shows of the 2000s 145.8k VOTES Some great TV shows came out of the 2000s, while some have even lived on. Here's a list of the best shows that aired from 20...
#145 of 279 The Best Hulu TV Shows 8k VOTES The absolute best shows streaming on Hulu, ranked from the most popular to the least by the Ranker community. This list has ...
#15 of 32 The Best 2000s Reality Shows 1.4k VOTES These are the best 2000s reality shows ranked from best to worst by user votes. Some great 2000s reality programs are center...
#1 of 40 The Best Shows About Fashion 4.6k VOTES The very best fashion shows on television, ranked from best to worst by fans' votes. This list of the greatest fashion shows...
#20 of 94 The Best Lifetime Television TV Shows 2.9k VOTES List of popular Lifetime Television shows, ranked from best to worst. This list of the top current and cancelled Lifetime Te...
#2 of 27 The Best Creative Skill Reality Series Ever 129 VOTES Have you ever wondered what kinds of secret skills your friend might be hiding? If you learn your loved ones have a certain ...
#2 of 30 The Best Career Competition Shows Ever Made 57 VOTES It’s almost impossible to turn on a television these days and not find a reality television program of some sort. One of the...