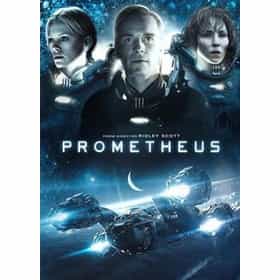 Prometheus is a 2012 science fiction film directed by Ridley Scott, written by Jon Spaihts and Damon Lindelof, and starring Noomi Rapace, Michael Fassbender, Guy Pearce, Idris Elba, Logan Marshall-Green, and Charlize Theron. It is set in the late 21st century and centers on the crew of the spaceship Prometheus as it follows a star map discovered among the artifacts of several ancient Earth cultures. Seeking the origins of humanity, the crew arrives on a distant world and discovers a threat that could cause the extinction of the human race. Development of the film began in the early 2000s as a fifth installment in the Alien franchise. Scott and director James Cameron developed ideas for ... more on Wikipedia

The Best Characters in the Whole Alien Franchise, Ranked 1.4k votes Film buffs, we are ranking the greatest characters in the Alien franchise. From Prometheus to Alien Resurrection, the best A...

Prometheus is ranked on...

Prometheus is also found on...