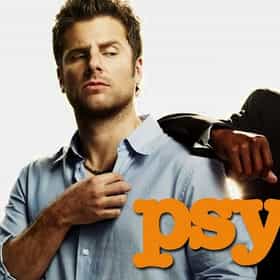 Psych is an American detective comedy-drama television series created by Steve Franks and broadcast on USA Network with syndication reruns on ION Television. It is produced by Franks and Tagline Television's Chris Henze and Kelly Kulchak. The series stars James Roday as Shawn Spencer, a young consultant for the Santa Barbara Police Department whose "heightened observational skills" and impressive detective instincts allow him to convince people that he solves cases with psychic abilities. ... more on Wikipedia

Psych is ranked on...

#103 of 779 People who voted for Psych... also upvote Guardians of the Galaxy Franchise on Most Anticipated New Movies also upvote Guardians of the Galaxy 2 on Most Anticipated New Movies The Best TV Shows to Binge Watch 1.2M VOTES Bored? Not anymore! These are the best TV shows for binge-watching. The greatest television shows in the world are ranked he...
#85 of 396 TV Shows That Only Smart People Appreciate 1.3M VOTES Since about the early 2000s, TV audiences have been blessed with what many experts call The Golden Age of Television. In oth...
#15 of 62 The Best Crime Fighting Duo TV Series 20k VOTES Sometimes the best TV crime series are is based on a duo of great crime fighting duos rather than an ensemble cast or one he...
#77 of 408 The Best TV Shows to Rewatch 131.6k VOTES List of the best TV shows to rewatch, as ranked by television fans and critics. When the weekend comes around and you can’t ...
#110 of 483 People who voted for Psych... also upvote Star Wars Franchise on The Best Movies of All Time also upvote Lord of the Rings Franchise on The Best Movies of All Time The Funniest TV Shows of All Time 532.7k VOTES   The funniest TV shows ever range from some of the best TV shows of recent memory to some of the best TV shows of al...
#1 of 53 The Best USA Network Original Series 6.7k VOTES USA network was perhaps the first cable network to really invest in creating quality original programming.  Listed are ...
#2 of 70 The Most Anticipated Shows On Peacock 630 VOTES Launching in April 2020, Peacock from NBCUniversal is offering 15,000 hours of content from their formidable library. What w...
#93 of 128 Canceled Shows We'd Most Like to See as Movies 204.9k VOTES This list of canceled shows we'd like to see as movies includes a lot of huge cult favorites. Obviously this list isn't comp...
#10 of 23 What to Watch If You Love White Collar 1.2k VOTES If you’ve just finished binging every episode of White Collar and you’re wondering, “What’s next?” this list of shows a...
#79 of 149 The Best TV Shows of 2013 34.6k VOTES Best TV shows of 2013 include some of the greatest television shows of all time and serve to remind us that we are, in fact,...
#65 of 70 The Best TV Shows That Aired in 2012 9k VOTES Now that 2012 is over, which shows stand out from the past year? Which just need to be wrapped up already? Vote now!
#19 of 74 The Funniest TV Shows of 2013 5.3k VOTES Is there anything better than a TV show that can make you laugh so hard that for a second you can’t breathe? That sort of gu...
#25 of 39 The Funniest TV Shows of 2012 2.7k VOTES The funniest TV shows of 2012 allowed us to unwind after a long day with witty writing and belly busting laughs. These comed...
#42 of 132 The Best TV Crime Dramas 34.6k VOTES The very best crime fiction shows on television, ranked from best to worst. This is a list of the greatest crime fiction sho...
#32 of 167 The Best Mystery TV Shows 68.6k VOTES The best Mystery TV shows make trying to solve a great mystery exciting for both the fans and characters. Nothing beats the ...
#4 of 49 The Best Procedural Dramas of All Time 713 VOTES Procedural dramas can get your adrenaline pumping and keep you hooked from the get go, but which procedural dramas are the b...
#26 of 69 Good TV Shows for Teens 1.3k VOTES Finding the best shows for teenagers to watch can be tricky. Not all TV shows starring teens (or actors playing teens) are n...
#21 of 44 The Best 2000s Crime Drama TV Shows 1.9k VOTES These are the best 2000s crime drama TV shows, ranked by user votes.  Some of these good 2000s crime drama series are a...
#11 of 44 The Greatest TV Shows About Best Friends 1.6k VOTES Everyone's got at least one of them and that's why we love to watch TV shows about best friends. Whether you're talking abou...

Psych is also found on...