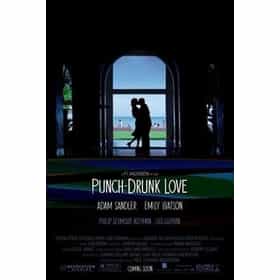 Punch-Drunk Love is a 2002 romantic comedy-drama film written and directed by Paul Thomas Anderson and starring Adam Sandler, Emily Watson, Mary Lynn Rajskub, Philip Seymour Hoffman and Luis Guzmán. After the release of his previous film Magnolia, Anderson stated that he would like to work with Adam Sandler in the future and that he was determined to make his next film ninety minutes long. The film was produced by Revolution Studios and New Line Cinema, and distributed by Columbia Pictures; it features the video art of Jeremy Blake in the form of visual interludes. ... more on Wikipedia

Punch-Drunk Love is ranked on...

Punch-Drunk Love is also found on...