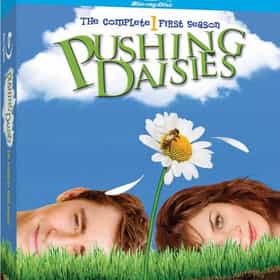 Pushing Daisies is an American fantasy comedy-drama television series created by Bryan Fuller that aired on ABC from October 3, 2007, to June 13, 2009. The series stars Lee Pace as Ned, a pie-maker with the ability to bring things back to life with his touch, an ability that comes with stipulations. The cast includes Anna Friel, Chi McBride, Kristin Chenoweth, Ellen Greene, and Swoosie Kurtz. The series is narrated by Jim Dale. Touted as a "forensic fairy tale", the series is known for its unusual visual style, quirky characters, and fast-paced dialogue, often employing wordplay, metaphor, and double entendre ... more on Wikipedia

Creepy Scenes In 'Pushing Daisies' That Were Brushed Aside By The Show's Wholesome Atmosphere 2.8k views Pushing Daisies is remembered for its lighthearted and romantic atmosphere that touched many viewers. Like countless other g...

Pushing Daisies is ranked on...

Pushing Daisies is also found on...