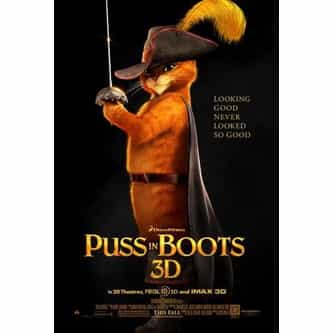 Puss in Boots is a 2011 American computer-animated action comedy film produced by DreamWorks Animation, directed by Chris Miller, executive produced by Guillermo del Toro, and written by Brian Lynch, with screenplay by Tom Wheeler. It stars Antonio Banderas, Salma Hayek, Zach Galifianakis, Billy Bob Thornton and Amy Sedaris. The film was released in theaters on October 28, 2011 in Digital 3D and IMAX 3D. Although the character of Puss in Boots originated in a European fairy tale in 1697, ... more on Wikipedia

Puss in Boots IS LISTED ON