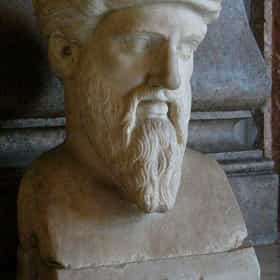 Pythagoras of Samos (c. 570 – c. 495 BC) was an ancient Ionian Greek philosopher and the eponymous founder of Pythagoreanism. His political and religious teachings were well known in Magna Graecia and influenced the philosophies of Plato, Aristotle, and, through them, Western philosophy. Knowledge of his life is clouded by legend, but he appears to have been the son of Mnesarchus, a gem-engraver on the island of Samos. Modern scholars disagree regarding Pythagoras's education and influences, but they do agree that, around 530 BC, he travelled to Croton, where he founded a school in which initiates were sworn to secrecy and lived a communal, ascetic lifestyle. This lifestyle entailed a ... more on Wikipedia

Pythagoras is ranked on...

#17 of 1,472 People who voted for Pythagoras... People in the Central US are 2x more likely to vote for this The Greatest Minds of All Time 741k VOTES List of the Greatest Minds of All Time, throughout history. This list represents the most influential thinkers across variou...
#48 of 2,830 The Most Influential People of All Time 2.4M VOTES This is a list of the most influential people of all of human history. This means that the individuals on this list have had...
#12 of 17 How Would Notable Historical Geniuses Do In A Modern High School? 133 VOTES High school is tough, and the classes are often the least of a student's worries. Between social navigation, hormones, and p...

Pythagoras is also found on...