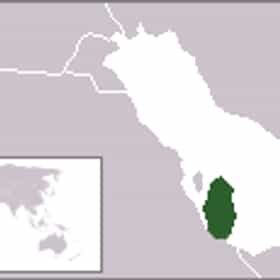 Qatar, officially the State of Qatar, is a sovereign Arab country located in Southwest Asia, occupying the small Qatar Peninsula on the northeastern coast of the Arabian Peninsula. Its sole land border is with Saudi Arabia to the south, with the rest of its territory surrounded by the Persian Gulf. A strait in the Persian Gulf separates Qatar from the nearby island kingdom of Bahrain. In 2013, Qatar's total population was 1.8 million: 278,000 Qatari citizens and 1.5 million expatriates. Following Ottoman rule, Qatar became a British protectorate in the early 20th century until gaining independence in 1971. Qatar has been ruled by the Al Thani family since the mid-19th century. Qatar is ... more on Wikipedia

Qatar is ranked on...

Qatar is also found on...