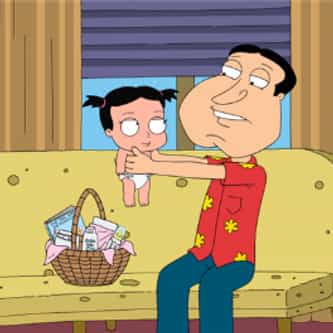 "Quagmire's Baby" is the sixth episode of the eighth season of the animated comedy series Family Guy. It originally aired on Fox in the United States on November 15, 2009. The episode centers around neighbor Glenn Quagmire, who suddenly discovers that he is the illegitimate father of a newborn baby girl, when she is left at his doorstep. While he takes care of the baby, whom he names Anna Lee, Quagmire quickly becomes reluctant to give up his sex life, and must decide whether to ... more on Wikipedia

Quagmire's Baby IS LISTED ON