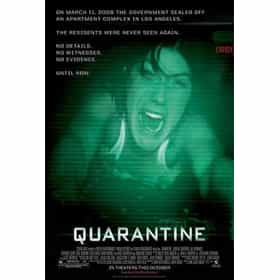 Quarantine is a 2008 American science fiction horror film directed by John Erick Dowdle and starring Jennifer Carpenter, Jay Hernandez, Columbus Short, Greg Germann, Steve Harris, Dania Ramirez, Rade Sherbedgia and Johnathon Schaech. The film is a remake of the Spanish film REC and features several differences such as added and excluded scenes and characters, dialogue and a different explanation for the virus. Shot in the "found footage" style, the movie was released on October 10, 2008 by Screen Gems. Quarantine features no incidental music, being "scored" only with sound effects. It received mixed reviews from critics and was moderately successful at the box ... more on Wikipedia

Quarantine is ranked on...

#176 of 804 The Best Horror Movies Of All Time 1.1M VOTES Horror movies, ranked by adrenaline junkies worldwide. Anyone can vote on this CrowdRanked list, and can even add your own f...
#320 of 551 The Best Movies of the 2000s 72.6k VOTES List of the best films released between the years 2000 and 2009, the era frequently referred to as the '00s or the "aug...
#12 of 30 The 22+ Best Fast Moving Zombie Movies 3k VOTES For decades zombies chased after brains at a leisurely pace, but in recent years the undead have started running at breaknec...
#10 of 110 The Most Horrifying Found-Footage Movies 64.4k VOTES In the mood for a frightful night? Browse through this list of the scariest found footage films, for movies with the most te...
#15 of 111 The Best Movies About Disease Outbreaks 56.7k VOTES A list of the best movies with disease outbreaks. Are you a fan of movies about scary infections and crazy medical pandemics...
#16 of 203 The Best Zombie Horror Films 3.8k VOTES This list of the best zombie horror movies doesn't discriminate on why the zombies exist, it only screams in terror at the f...
#30 of 151 People who voted for Quarantine... Women are 2x more likely to vote for this The Best Zombie Movies of All Time 173.6k VOTES List of the best zombie movies ever, including popular blockbusters like Zombieland, 28 Days Later, and Dawn of the Dea...
#6 of 47 The Best Horror Movies About Virus Outbreaks 6.4k VOTES There's something in the air, and you definitely don't want to breath it in. Horror movies about viruses and diseases are pa...
#29 of 69 The Best Horror Movie Remakes 42.3k VOTES A list of the best horror movie remakes. Are you looking for newer versions of an old horror movie favorite? Browse through ...
#116 of 505 The Scariest Movies Ever Made 549.3k VOTES These are the all-time scariest movies ever made. Many of these movies have become part of the pop culture lexicon due to th...
#10 of 16 The Best Columbus Short Movies 269 VOTES List of the best Columbus Short movies, ranked best to worst with movie trailers when available. Columbus Short's highest gr...
#18 of 20 The Best Horror Movies Set in Los Angeles 118 VOTES Most people think of L.A. as a place where dreams of stardom come true, but the best horror films set in Los Angeles show a ...

Quarantine is also found on...

All Movies About Fire