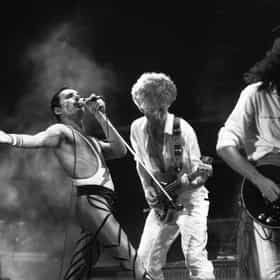 Queen are a British rock band formed in London in 1970. Their classic line-up was Freddie Mercury (lead vocals and piano), Brian May (lead guitar and vocals), Roger Taylor (drums and vocals) and John Deacon (bass guitar). Their earliest works were influenced by progressive rock, hard rock and heavy metal, but the band gradually ventured into more conventional and radio-friendly works by incorporating further styles, such as arena rock and pop rock. Before forming Queen, May and Taylor had played together in the band Smile. Mercury was a fan of Smile and encouraged them to experiment with more elaborate stage and recording techniques. He joined in 1970 and suggested the name ... more on Wikipedia

Bruce Springsteen
Queen Celebrated Their Seventh Album Release With Possibly The Most Debaucherous Party Ever 105.2k views In 1978, Queen threw a party at the Fairmont Hotel in New Orleans, LA. Freddie Mercury and Queen were basking in the success...
Behind-The-Scenes Stories From The Recording Of 'Bohemian Rhapsody' 69.6k views No, we will not let you go, "Bohemian Rhapsody." Queen's epic, nearly six-minute 1975 opus has become a classic ro...
The Best Queen Songs of All Time 63k votes This is a list of Queen songs, ranked from best to worst by the Ranker community. All of Queen's singles are included here, ...
All Of The Inaccuracies In 'Bohemian Rhapsody' 1M views Bohemian Rhapsody might make you sing, cheer, weep, and even squint in suspicion more than once. In fact, most of what happe...
All Queen Albums, Ranked Best To Worst 7.5k votes Every Queen studio release, ranked by fan votes from best to worst. Queen were one of the most popular bands of the Seventie...
Behind The Scenes Of The Movie 'Bohemian Rhapsody' 199.1k views Bohemian Rhapsody, the 2018 movie about Queen and beloved singer Freddie Mercury, took the top spot at the box office when i...
The Behind-The-Scenes Rivalry And Making Of 'Under Pressure' 96.1k views When David Bowie and Freddie Mercury came together to record "Under Pressure" in 1981, the result was one of the b...
Queen Accidentally Gave The Sex Pistols Their Big Break, Even Though The Bands Hated Each Other 48.9k views Everyone loves a good feud, and music history is full of larger-than-life conflicts and confrontations. One of the most surp...
The 13 Best Theories About Queen's 'Bohemian Rhapsody' 3.9k votes Released in 1975 as part of Queen's Night at the Opera album, "Bohemian Rhapsody" was allegedly the most expensive...
Inside The Fascinating Life Of Queen Guitarist Brian May 14k views Few people wear the "Renaissance" title as well as Queen guitarist Brian May. He may be best known for his decades...
'Bohemian Rhapsody' Actors Vs. The Real People They Play 30.7k votes The Freddie Mercury biopic Bohemian Rhapsody tells the tale of the legendary singer and the formation of Queen, from the ban...
The Real Bohemian Rhapsody Ending: What Actually Happened To Queen After Their Live Aid Performance 158.2k views Bohemian Rhapsody introduced audiences to the origins of Queen and detailed their rise to stardom, but left out the rest of ...
Inside Queen's Unforgettable Live Aid Performance 388.7k views When Queen performed at Live Aid, they gave the show of a lifetime. Often called Queen's best live show, the 20-minute perfo...
What Freddie Mercury's Relationship With His Bandmates Was Really Like 403.4k views Freddie Mercury's impact on Queen, on music, and the world is his legacy. Mercury's relationships with those around him - es...
Secrets Behind Freddie Mercury's Wardrobe 9.8k views Freddie Mercury (real name Farrokh Bulsara) once said that when the audience went to a Queen show, "It is not a concert...
Every Member of Queen, Ranked Best to Worst 5.3k votes Queen is one of the most iconic rock bands of all time, and the men who made up the group over the years stand as some of th...
Which Queen Song Are You, According To Your Zodiac Sign? 6.2k views Whether you simply want to ride your bicycle or you're looking for somebody to love, there's a Queen song that describes you...
These New 'Bohemian Rhapsody' Images Have Blown Our Minds 2.1k views Movie studio 20th Century Fox released new images of Bohemian Rhapsody, the upcoming biopic about legendary British rock ban...

Queen is ranked on...

Queen is also found on...