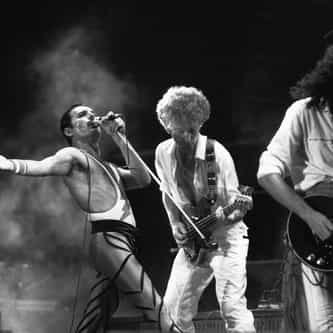 Queen are a British rock band formed in London in 1970. Their classic line-up was Freddie Mercury (lead vocals and piano), Brian May (lead guitar and vocals), Roger Taylor (drums and vocals) and John Deacon (bass guitar). Their earliest works were influenced by progressive rock, hard rock and heavy metal, but the band gradually ventured into more conventional and radio-friendly works by incorporating further styles, such as arena rock and pop rock. Before forming Queen, May and Taylor had ... more on Wikipedia

90.1k votes The Best Queen Songs of All Time

15.4k readers Inside The Fascinating Life Of Queen Guitarist Brian May

71.4k readers Behind-The-Scenes Stories From The Recording Of 'Bohemian Rhapsody'

51.1k readers Queen Accidentally Gave The Sex Pistols Their Big Break, Even Though The Bands Hated Each Other

466.9k readers What Freddie Mercury's Relationship With His Bandmates Was Really Like

1M readers All Of The Inaccuracies In 'Bohemian Rhapsody'

232.1k readers Behind The Scenes Of The Movie 'Bohemian Rhapsody'

7.6k votes Every Member of Queen, Ranked Best to Worst

266.9k readers Queen Celebrated Their Seventh Album Release With Possibly The Most Debaucherous Party Ever

109.6k readers The Behind-The-Scenes Rivalry And Making Of 'Under Pressure'

6.9k readers Which Queen Song Are You, According To Your Zodiac Sign?

Queen IS LISTED ON

i want to scream quotes, songs to send to your ex, songs not on spotify, folk rock bands, spanish guitar player, christmas songs with sheep in them, important deaths 2010, all you can eat crabs, stream of consciousness lyrics, andrew jacobs actor age