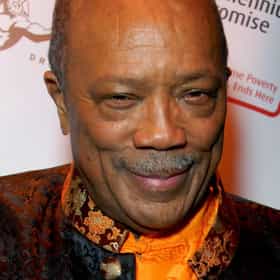 Quincy Delight Jones Jr. (born March 14, 1933) is an American record producer, multi-instrumentalist, singer, and film producer. His career spans over 60 years in the entertainment industry with a record 80 Grammy Award nominations, 28 Grammys, and a Grammy Legend Award in 1992. Jones came to prominence in the 1950s as a jazz arranger and conductor, before moving on to work in pop music and film scores. In 1969, Jones and his songwriting partner Bob Russell became the first African-Americans to be nominated for an Academy Award for Best Original Song, for "The Eyes of Love" from the film Banning. Jones was also nominated for an Academy Award for Best Original Score for his ... more on Wikipedia

Quincy Jones is ranked on...

#272 of 1,041 Celebrity Death Pool 2020 108.6k VOTES They may be beloved performers, award winners, or game changers, but no matter how famous, you can’t escape death. This cele...
#8 of 69 People who voted for Quincy Jones... People in the South are 3x more likely to vote for this Celebrities with the Weirdest Middle Names 35.2k VOTES Have you always wondered about celebrity middle names? Just like regular people, many celebs and super famous people have we...
#377 of 1,445 Celebrity Death Pool 2018 477.7k VOTES Welcome to Celebrity Death Pool 2018! In increasingly uncertain times, there remains one constant in life - we all die. Cele...
#13 of 21 People Who Have EGOT Awards 5.6k VOTES It’s an achievement very few people have managed: snagging the coveted EGOT. Also known as an Emmy, a Grammy, an Oscar, and ...
#100 of 138 The Best Disco Bands/Artists 13.8k VOTES What separates disco bands from their pop music contemporaries is that their music is not only catchy and hip shaking, it's ...
Celebrities Who Grew Up in Families of Actors 287.1k VIEWS List of Celebrities in Actor Families ranked by fame and popularity. Many people take up the family business and actors are ...
28 Celebrities Who Have Biracial Children 318.4k VIEWS This list contains information about celebrities who have biracial children, loosely ranked by fame and popularity. Several ...
50+ Celebrities Who Were in School Choir 110.8k VIEWS This list of celebrities who were in choir is loosely ranked by fame and popularity. Several famous musicians, actors, polit...
#133 of 151 The Best People Who Hosted SNL In The '90s 1.9k VOTES The 1990s were a period of transition and change for Saturday Night Live, but they carried through and started the new mille...
Celebrity Dads Who Are BFFs with Their Daughters 3.2k VIEWS Dads will always have a soft spot for their little girls, and celebrity dads with daughters are no exception. Every now and ...
75+ Straight Celebrities Who Fight for Gay Rights 196.5k VIEWS You don't have to be gay to fight for gay rights, as the straight celebrities on this list have proven. Several famous strai...
53 Celebrities with Honorary Degrees from Harvard 19.3k VIEWS This list contains information about celebrities who have received honorary degrees from Harvard University, loosely ranked ...

Quincy Jones is also found on...