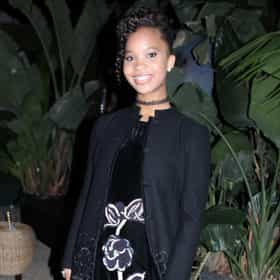 Quvenzhané Wallis (born August 28, 2003) is an American actress, model, and singer. She is known for her role as Hushpuppy in the critically acclaimed drama film Beasts of the Southern Wild, for which she became the youngest actress ever to receive a nomination for the Academy Award for Best Actress. She is also well-known for starring in the 2014 Annie remake, receiving a Golden Globe nomination for her work in the movie. ... more on Wikipedia

Quvenzhané Wallis is ranked on...

#197 of 327 People who voted for Quvenzhané Wallis... also upvote Hillary Clinton on The Best 2016 Presidential Candidates also upvote Sia Furler on The Best Current Female Singers The Best Actresses Working Today 392k VOTES List of the best actresses working today, ranked. This list includes many of the greatest actresses in film history, but mor...
#37 of 60 The Greatest Non-White Actresses 9.5k VOTES In 1939, Hattie McDaniel became the first African-American to win an Academy Award. She was recognized for her work in Gone ...
#3 of 35 Celebrities Whose Names Are Hardest to Spell 9.2k VOTES Some big time Hollywood celebrities have one tiny thing wrong with them: it's very hard to spell their names. These celebrit...
#91 of 100 The 100+ Greatest Film Actresses Of The 2010s 6.9k VOTES The 2010s provided some of the best films of all time. That wouldn’t have been possible if it wasn't for the amazing work of...
#17 of 44 The Biggest Breakthrough Stars of 2012 3.3k VOTES The hottest breakthrough celebrities of 2012 include a wide variety of actors, actresses, musicians and TV stars who, for wh...
#23 of 28 Who Should Play Squirrel Girl in the Marvel Movies? 2.9k VOTES So, who could play Squirrel Girl in a movie? Doreen Green isn't too high on the list of most popular Marvel characters, but ...
#28 of 32 32 Actors Who Have Taken Family Members to Award Shows 479 VOTES Stars: They're just like us. They might be talented and famous and uber-attractive, but they still bring their moms as dates...
#16 of 36 The Best Black Actresses Under 25 1.5k VOTES When it comes to amazing young black actresses, Hollywood is full of rising stars. From black actresses in their 20s and tee...
How to Pronounce Tricky Celebrity Names 16.4k VIEWS Not every celebrity name is as straight-forward as "Tom Hanks" and you won't find him anywhere near this list, whi...

Quvenzhané Wallis is also found on...