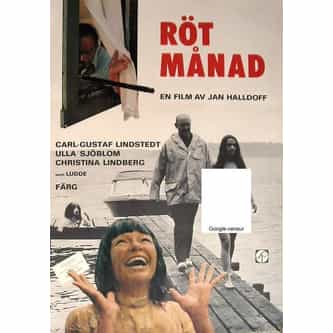 Rötmånad is a Swedish dark comedy film from 1970 directed by Jan Halldoff. In the Stockholm archipelago lives the barber Assar Gustafsson peacefully with his 17-year old daughter Anna-Bella. One day Assar’s wife Sally comes back after five years of absence and she starts up a brothel with the young girl as the main attraction. The film contains a lot of nudity and violence, but also a lot of humor, and has achieved cult film status in Sweden. In 2014, SF released it on DVD as ... more on Wikipedia