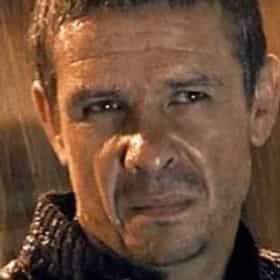 Ra's al Ghul is a fictional supervillain who appears in comic books published by DC Comics. Besides being considered to be one of Batman's greatest enemies, given his high status as a supervillain, Ra's al Ghul has also come into conflict with Superman and other heroes in the DC Universe. He is the son of Sensei, the father of Talia al Ghul, Nyssa Raatko, and Dusan al Ghul, and the grandfather of Damian Wayne. His name in Arabic has been translated in the comics as "The Demon's Head". Ra's al Ghul has been featured in various media adaptions, most notably voiced by David Warner in Batman: The Animated Series and by Dee Bradley Baker in Batman: Arkham City, and was portrayed ... more on Wikipedia

#8 of 93 The Best Villains The Justice League Has Ever Faced 39.5k VOTES The original members of the Justice League have been a part of the DC universe for some time now, but it wasn't until 1960 t...
#9 of 88 The Best Batman Villains Ever 141.7k VOTES Batman has, arguably, the greatest rogues gallery in all of comics, so let's rank every Batman villain best to worst! Bad gu...
#14 of 97 People who voted for Ra's al Ghul... also upvote Dark Knight Franchise on The Best Superhero Movies Ever Made The Best Characters from Batman Comics 119.4k VOTES The DC Universe has some great characters in it, but perhaps Gotham City has some of the best. Being non-superpowered, Batma...
#14 of 53 The Coolest Characters from CW's Arrow 28.1k VOTES The CW's Arrow is one of the most popular comic book based shows on network television. Based on DC Comics' Green Arrow...
#15 of 24 The 25 Hottest Batman Villains Ever 9.4k VOTES DC Comics has perfected the craft of creating intriguing female villains, arguably because their outlaws are often easy on t...
All of Batman's Deadliest Villains & Enemies, Listed 920.2k VIEWS List of all Batman villains and enemies found on this Batman villains list. This list contains all super villains Batman has...
All DC Villains & DC Comics Enemies 402k VIEWS DC villains list is a huge list of all the villains from DC Comics. Supervillains make life miserable for the heroes and m...
#19 of 23 The Best Characters On 'Gotham' 4k VOTES We're ranking the best characters on Gotham. The hit superhero show centers on a young Commissioner Gordon (played by Ben Mc...
#9 of 18 The Best Characters in the Nolan's Dark Knight Series, Ranked 2.6k VOTES Film buffs, we are ranking the greatest characters in Christopher Nolan's The Dark Knight Trilogy. From Batma...
Every Batman Villain Is Just A Reflection Of The Caped Crusader's Damaged Mind 125.4k VIEWS There is a popular theory, sometimes called the Batman Villain fan theory or Bruce Wayne crazy theory, which suggests the ca...
13 Comic Book Characters Who Are Constantly Dying 7k VIEWS Much like soap operas, western comic books are filled with deep-seated drama and good, old-fashioned comic book character de...
#4 of 62 The Best Liam Neeson Characters 1.4k VOTES Liam Neeson characters list, ranked from best to worst with clips from the movie when available. These Liam Neeson roles inc...
What Your Favorite Batman Villain Says About You 856 VIEWS Batman’s rogues' gallery is unlike any other. His well of crazy, color-coordinating villains runs deep; there are ...