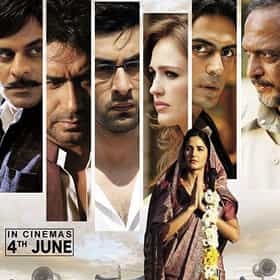 Raajneeti is a 2010 Indian political thriller film co- written, directed and produced by Prakash Jha, with a screenplay by Anjum Rajabali and Prakash Jha, and starring Ajay Devgan, Nana Patekar, Ranbir Kapoor, Katrina Kaif, Arjun Rampal, Manoj Bajpayee and Naseeruddin Shah in the lead roles. It was originally produced by Prakash Jha Productions and was distributed by UTV Motion Pictures and Walkwater Media. It was shot in Bhopal. The title translates literally as "Politics" and contextually as "Affairs of State." The film draws parallels to the epic Mahabharata where shades of Krishna, Arjuna, Bheema, Duryodhana and Karna can be seen in the characters portrayed. ... more on Wikipedia

Raajneeti is ranked on...

Raajneeti is also found on...