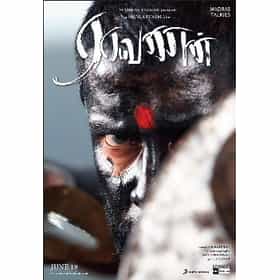 Raavanan is a 2010 Indian Tamil thriller film written, produced, and directed by Mani Ratnam. The film features Vikram, Aishwarya Rai Bachchan and Prithviraj in the lead roles, with a supporting cast led by Karthik, Prabhu and Priyamani. The film was also made simultaneously in Hindi as Raavan, with a slightly different cast. Furthermore, the film was dubbed and released in Telugu as Villain, with all three versions releasing simultaneously on 18 June 2010. The film follows the crux of the epic Ramayana, with a ruthless police officer on the chase to find a tribal leader and lawbreaker, who has kidnapped his wife. Veeraiya, the kidnapper and his motive for the kidnap has been led on by ... more on Wikipedia

Raavanan is ranked on...

Raavanan is also found on...