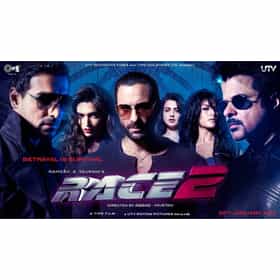 Race 2 is a Bollywood action thriller film directed by Abbas Burmawalla, Mustan Burmawalla and produced under the Tips Music Films banner. It is the sequel to the 2008 film, Race and the second installment of Race film series. It stars an ensemble cast that includes Anil Kapoor and Saif Ali Khan reprising their roles as Robert D'Costa and Ranveer Singh respectively, while Deepika Padukone, John Abraham, Jacqueline Fernandez and Ameesha Patel are new additions to the cast. Bipasha Basu reprised her role of Sonia Martin in a special appearance. Made on a budget of 600 million, Race 2 was released on 25 January 2013 and opened to mixed reviews from critics and highly positive response at ... more on Wikipedia