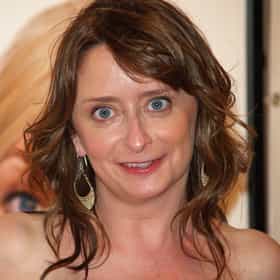 Rachel Susan Dratch (born February 22, 1966) is an American actress, comedian, and writer. Born and raised in Lexington, Massachusetts, she graduated from Dartmouth College in 1988 and moved to Chicago, Illinois, to study improvisational theatre at The Second City and ImprovOlympic. Her breakthrough came on the NBC television show Saturday Night Live (SNL), where she was a cast member from 1999 to 2006. In addition to her work on SNL, she has appeared as a guest star in television shows such as The King of Queens and 30 Rock, as well as films such as Click and I Now Pronounce You Chuck and Larry. In 2012, she published her autobiographical book Girl Walks Into a Bar: Comedy Calamities, ... more on Wikipedia

Rachel Dratch is ranked on...

#38 of 96 People who voted for Rachel Dratch... People in the Northeast are 2x more likely to vote for this also upvote Kristen Wiig on The Funniest Female Comedians of All Time The Best SNL Cast Members of All Time 373.6k VOTES A list of the best Saturday Night Live cast members from the show's 40 seasons. The sketch comedy show has long been a favor...
#195 of 294 The Funniest Female Comedians of All Time 253.2k VOTES The funniest female comedians star on our favorite sitcoms, perform standup at the top comedy clubs and best of all, make us...
#51 of 70 The Most Successful Saturday Night Live Alumni 51k VOTES This list of the most successful Saturday Night Live alumni in the show’s history, has been ranked by SNL fans. In the 40+ s...
#21 of 46 The Best SNL Cast Members of the '90s 5.9k VOTES The '90s for Saturday Night Live was just as tumultuous as the '80s had be as NBC executives continued to mess with the sh...
#16 of 30 The Best SNL Cast Members of the '00s 4.5k VOTES Saturday Night Live in the 2000s saw a lot of watershed events. The 2000 presidential election figured heavy in sketc...
#7 of 43 The Funniest Female SNL Alumni 22.7k VOTES List of the funniest women to ever be on Saturday Night Live, as ranked by SNL fans and critics. In the history of SNL there...
#25 of 57 Who Was America's Crazy Aunt in 2015? 5.1k VOTES Everyone has a crazy aunt. That sister your mom rarely talks about, but who you think is the most fun person in the world. I...
Famous Second City Members 9.6k VIEWS List of Famous Second City Members ranked by fame and popularity. The Second City is a improv based sketch comedy organizati...
90s SNL Favorites: Where Are They Now? 33.7k VIEWS Back in the old timey days of the '90s, Saturday Night Live was a hotbed for funny people. Yes, tweens, people were alive ...
99 Celebrities Who Went to Ivy League Schools 380k VIEWS Celebrities who went to Ivy League schools are those smarty pants actors, musicians, and other famous people in the entert...
#14 of 82 Former Cast Members We Want To See Host SNL 321 VOTES When Adam Sandler returned to the halls of Studio 8H in 2019 to host Saturday Night Live, many were surprised that the famed...
50+ Actors Who Have Done Shakespeare in the Park 7.6k VIEWS Shakespeare in the Park festivals are popular all over the world. In cities like New York City, several famous actors and ac...
Famous People Named Rachel 40.4k VIEWS List of famous people named Rachel, along with photos. How many celebrities named Rachel can you think of? The famous Rachel...

Rachel Dratch is also found on...