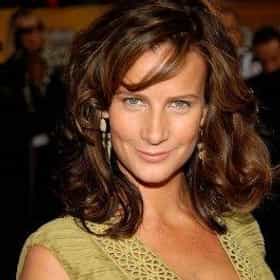 Rachel Anne Griffiths (born December 18, 1968) is an Australian actress and director. Raised primarily in Melbourne, she began her acting career appearing on the Australian series Secrets before being cast in a supporting role in the comedy Muriel's Wedding (1994), which earned her an AACTA Award for Best Actress in a Supporting Role. In 1997, she was the lead in Nadia Tass's drama Amy. She would garner further international recognition for her role opposite Julia Roberts in the American romantic comedy My Best Friend's Wedding (1997), followed by her role as Hilary du Pré in the biopic Hilary and Jackie (1998), for which she was nominated for an Academy Award for Best ... more on Wikipedia

Rachel Griffiths is ranked on...

#695 of 1,026 The Most Beautiful Women In Hollywood 4.4M VOTES The most beautiful women in the world are a great mix of attractive TV actresses, singers, models, and more, ...
#132 of 181 The Greatest Actresses Who Have Never Won an Oscar (for Acting) 64.4k VOTES There are many actresses who haven't won an Oscar. For 95 percent of the acting population, there is probably a good reason ...
Actors And Actresses Who Were Only A Couple Years Older Than The People Playing Their Kids 31.1k VIEWS Hollywood isn't known for being particularly concerned with realism. This is manifested in a variety of ways, especially&nbs...
37 Actresses Who Filmed While Pregnant 2.4M VIEWS Several actresses have filmed television shows and movies while they were pregnant. Some of these famous moms had their preg...
100 Film and TV Celebs Who Have Also Starred on Broadway 15.2k VIEWS Film and TV celebs who have also starred on Broadway are those actors and actresses who have seen success both on screen and...
12 Real Pregnancies Written Into TV Shows 2.1M VIEWS When a television actress becomes pregnant in real life, it can affect her character's storyline. Several famous ladies have...
Famous People Named Rachel 40.6k VIEWS List of famous people named Rachel, along with photos. How many celebrities named Rachel can you think of? The famous Rachel...
Female Celebrities Who Are 5’8" 15.9k VIEWS This list contains examples of female celebs who are 5'8" loosely ranked by fame and popularity. Standing above the ave...
EW.com's Wildly Underrated TV Actresses 11k VIEWS These are the prime-time wonder women you say deserve more attention http://www.ew.com/ew/gallery/0,,20239137,00.html

Rachel Griffiths is also found on...