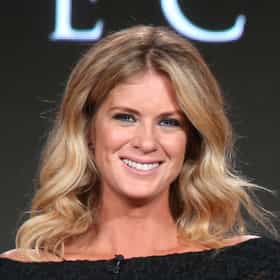 Rachel Hunter (born 8 September 1969) is a New Zealand model, actress and the host of Imagination Television's Rachel Hunter's Tour of Beauty. She has appeared on several magazine covers, including Vogue, Elle, Rolling Stone, Sports Illustrated, Playboy, Cosmopolitan and Harper's Bazaar. She has been on the cover of the Sports Illustrated Swimsuit Issue twice; in 1994 (alongside Kathy Ireland and Elle Macpherson) and in 2006 (alongside six other models). ... more on Wikipedia

Rachel Hunter is ranked on...

#963 of 3,307 People who voted for Rachel Hunter... People in the Midwest are 2x more likely to vote for this The Most Beautiful Women of All Time 132.1M VOTES Here are the most beautiful women of all time ranked not on looks alone, regardless of their talent. Thi...
#443 of 1,026 The Most Beautiful Women In Hollywood 4.4M VOTES The most beautiful women in the world are a great mix of attractive TV actresses, singers, models, and more, ...
#100 of 162 Hottest Female Celebrities in Their 40s in 2015 90.3k VOTES Time is tough on all of us, but it’s especially tough on women who make their living - at least partially - on their appeara...
#417 of 3,140 The Most Beautiful Celebrities Of Our Time 6.3M VOTES This list of hot celebrities is ranked by pop culture junkies worldwide, making it the best place to find the most attractiv...
#2 of 18 The Craziest Celebrity Impulse Buys 1.1k VOTES Despite the glaring differences, celebrities are pretty much just like us. They eat, they sleep, and they impulse buy all so...
#106 of 421 The Hottest Women Over 40 in 2013 602.7k VOTES This is an Ultimate List of the hottest women over 40. It's hard to believe that some of these well known women are over 40,...
50 Celebrities Who Broke Off Engagements 40.4k VIEWS This list contains information about celebrities who broke off engagements, loosely ranked by fame and popularity. Several f...
Famous People Whose Last Name Is Hunter 4.6k VIEWS Being a fairly common name, it's no surprise there are a lot of famous people with the last name Hunter. Do you recognize al...
53 Celebrities Who Own Horses 450.1k VIEWS Several famous actors, musicians, and athletes own horses. Some celebrities own large ranches where they are free to ride, w...
Famous Women Who Married Much Older Men 505.6k VIEWS List of Famous Women Who Married Older Men ranked by fame and popularity. It is quite common for women to marry older men, a...
14 Celebrities Who Were Left at the Altar 69.7k VIEWS It's the stuff of Hollywood screenplays: a man or woman left standing at the altar, jilted by someone to whom they were abou...
Bruce Willis's Loves & Hookups 37k VIEWS Who is Bruce Willis dating? Who Bruce Willis dated; list of Bruce Willis loves, ex girlfriends; breakup rumors. You know, I ...
Famous People Named Rachel 40.5k VIEWS List of famous people named Rachel, along with photos. How many celebrities named Rachel can you think of? The famous Rachel...
Travis Fimmel Loves and Hookups 3.8k VIEWS Who is Travis Fimmel dating? Many famous women have dated Vikings star Travis Fimmel, and this list will give you more detai...
Mark Wahlberg's Loves & Hookups 100.6k VIEWS Who is Mark Wahlberg dating? Who Mark Wahlberg dated; list of Mark Wahlberg loves, ex girlfriends; breakup rumors. The loves...
Female Celebrities Who Are 5’10" 9.4k VIEWS This list contains examples of female celebs who are 5'10" loosely ranked by fame and popularity. Standing above the av...
Celebrity Models Who Followed In Their Supermodel Moms' Footsteps 130 VIEWS You know what they say: "Like mother, like daughter." In this instance, it's like supermodel mother, like model da...
Joe Francis' Loves & Hookups 5.1k VIEWS Who is Joe Francis dating? Who Joe Francis dated; list of Joe Francis loves, ex girlfriends; breakup rumors. The loves and r...
EW.com's Sexiest Music Video Guest-Stars 10.9k VIEWS EW's list of the hottest music video stars of all time. These hot celebrities made the sexiest video appearances in music vi...

Rachel Hunter is also found on...