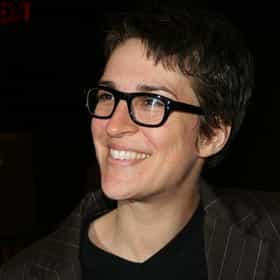 Rachel Anne Maddow ( (listen), MAD-oh; born April 1, 1973) is an American television host and liberal political commentator. Maddow hosts The Rachel Maddow Show, a nightly television show on MSNBC, and serves as the cable network's special event co-anchor alongside Brian Williams. Her syndicated talk radio program of the same name aired on Air America Radio. Maddow holds a doctorate in politics from Oxford University and is the first openly lesbian anchor to host a major prime-time news program in the United States. Asked about her political views by the Valley Advocate, Maddow replied, "I'm undoubtedly a liberal, which means that I'm in almost total agreement with the ... more on Wikipedia

Rachel Maddow is ranked on...

#187 of 276 The Most Trustworthy Celebrities in the World 782.8k VOTES Trust: the belief that someone or something is reliable, good, honest, effective, etc. When it comes to celebrities, do any ...
#123 of 148 Celebrities Hollywood Forced on Us 201.8k VOTES What is it with Hollywood trying its hardest to shove certain actors down everyone's throats? Now, more than ever, there are...
#113 of 531 Annoying Celebrities Who Should Just Go Away Already 1.2M VOTES The most annoying celebrities, ranked by entertainment fans themselves. These annoying celebs are obnoxious, overexposed, ...
#106 of 257 Celebrities Who Should Run for President 604.4k VOTES Which celebrity would you actually vote for if they ran for President of the United States? If you can remember all the way ...
#19 of 166 The Most Ridiculous Political Pundits 162.6k VOTES This is a bipartisan list of the most over-the-top, spittle-stained, fist-thumping, hyperbolic political pundits of all ti...
#43 of 54 The Most Influential News Anchors of All Time 14.2k VOTES TV news anchors have a long history of being trusted sources for world news and events. The best news anchors don't just rep...
#61 of 104 The Lamest Authors of All Time 70k VOTES There are always going be writers (and books) some folks just don't like. Books, and the skills of the people who write th...
#25 of 45 People who voted for Rachel Maddow... People in the Northeast are 2x more likely to vote for this are 9x more likely to vote for Wolf Blitzer on this list The Most Trustworthy Newscasters on TV Today 44.5k VOTES Who are the most trustworthy anchors and news personalities today? We all know the names Walter Cronkite, Edward R. Murrow, ...
#10 of 32 The Most Powerful People on Twitter 2.7k VOTES Who are the most powerful people on Twitter? Let's be clear: Having millions of followers, just because you are super-famous...
#102 of 113 People We Loved to Hate in 2013 40.4k VOTES These are the People we loved to hate in 2013. This list includes a slew of shocking, disheartening and downright dirty happ...
#11 of 12 TV Personalities You'd Want to Play Drinking Games With 2.1k VOTES We've all been there. A high school friend's basement while their parents are away. A college buddy's back porch on a lazy S...
42 Famous ENFPs 307k VIEWS Many famous actors, comedians and musicians are believed to be ENFPs (Extraverted Intuitive Feeling Perceiving). ENFPs are k...
Journalists Who Were Caught Lying 156.8k VIEWS It's not just politicians who lie through their teeth. Even some of the most trusted names in news have told a tall tale h...
Famous People Named Rachel 40.5k VIEWS List of famous people named Rachel, along with photos. How many celebrities named Rachel can you think of? The famous Rachel...
Celebrities Born On April Fools' Day 7.3k VIEWS Here are all the famous people who were born on April 1st, April Fools' Day. Featuring actors, musicians, singers,...
EW.com's Smartest People In TV 6.4k VIEWS Sure, they call it the boob tube, but it takes some pretty big brains to make it in the TV biz. We polled Hollywood insiders...
2011 College Graduation Speakers 21.3k VIEWS We've compiled the most comprehensive list of commencement speakers for 2011 across all universities that we could put toget...

Rachel Maddow is also found on...