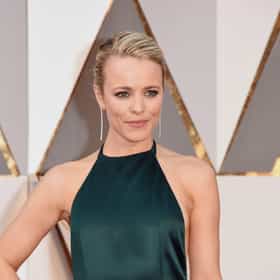 Rachel Anne McAdams (born November 17, 1978) is a Canadian actress and activist. After graduating from a four-year theatre degree program at York University in 2001, she worked in Canadian television and film productions, such as the drama film Perfect Pie (2002), for which she received a Genie Award nomination, the comedy film My Name Is Tanino (2002), and the comedy series Slings and Arrows, for which she won a Gemini Award. In 2002, she made her Hollywood film debut in the comedy The Hot Chick. McAdams rose to fame in 2004 with the comedy Mean Girls and the romantic drama The Notebook. In 2005, she starred in the romantic comedy Wedding Crashers, the psychological thriller Red Eye, ... more on Wikipedia

Rachel McAdams is ranked on...

Rachel McAdams is also found on...