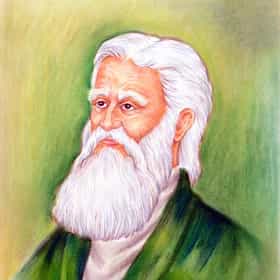 Abdur Rahmān Mohmand (1632–1706) (Pashto: عبدالرحمان بابا‎), or Rahmān Bābā (Pashto: رحمان بابا‎), was a renowned Pashtun Sufi Dervish and poet from Peshawar in the Mughal Empire (modern-day Khyber Pakhtunkhwa, Pakistan). He, along with his contemporary Khushal Khan Khattak, is considered one of the most popular poets among the Pashtuns in Afghanistan. His poetry expresses a peaceful mystical side of local culture which is becoming increasingly threatened by less tolerant interpretations of Islam. ... more on Wikipedia

Rahman Baba is also found on...