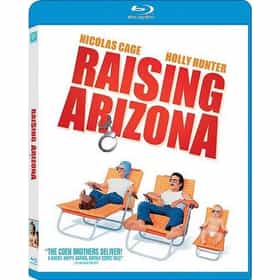 Raising Arizona is a 1987 American comedy film directed, written, and produced by the Coen brothers, and starring Nicolas Cage, Holly Hunter, William Forsythe, John Goodman, Frances McDormand, and Randall "Tex" Cobb. Not a blockbuster at the time of its release, it has since achieved cult status. In a manner typical of Coen Brothers fare, the movie is replete with symbolism, visual gags, unconventional characters, flamboyant camera work, biblical references, pathos, and idiosyncratic dialogue. The film ranked 31st on the American Film Institute's 100 Years...100 Laughs list, and 45th on Bravo's "100 Funniest Movies" list. ... more on Wikipedia

The Best Quotes From Raising Arizona 255 votes Raising Arizona is easily one of my favorite movies of all time, and the dialogue is as close to brilliant as you can get. T...

Raising Arizona is ranked on...

Raising Arizona is also found on...