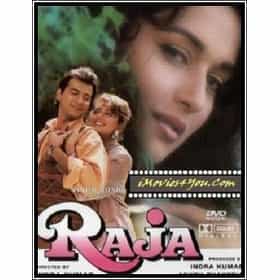 Raja is an Indian Bollywood movie released on 22 June 1995, starring Madhuri Dixit, Sanjay Kapoor, Paresh Rawal, Mukesh Khanna and Dalip Tahil. The film was Sanjay Kapoor's second film after his debut Prem with Tabu in Bollywood. Prem was a flop, but this film, though panned by critics to have many flaws did excellent business in Bollywood. Its success was attributed to Madhuri Dixit because of her ardent fans. It was the fourth highest grosser of the year at the box office Madhuri Dixit received a Filmfare Best Actress Award nomination, and won the Star Screen Award Best Actress for the year. ... more on Wikipedia

Raja is ranked on...

Raja is also found on...