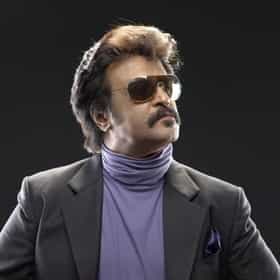 Shivaji Rao Gaekwad (born 12 December 1950), known by his mononymous stage name Rajinikanth, is an Indian film actor who works primarily in Tamil cinema. He began acting in plays while working in the Bangalore Transport Service as a bus conductor. In 1973, he joined the Madras Film Institute to pursue a diploma in acting and also mastered speaking Tamil language as his mother tongue was Marathi. Following his debut in K. Balachander's drama Apoorva Raagangal (1975), his acting career commenced with a brief phase of portraying antagonistic characters in Tamil films. After earning ₹26 crore (equivalent to ₹59 crore or US$8.5 million in 2018) for his role in Sivaji (2007), he was the ... more on Wikipedia

Rajnikanth is ranked on...

Rajnikanth is also found on...