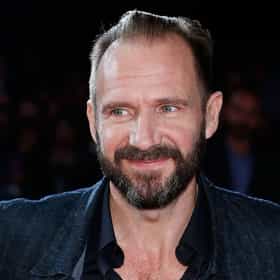 Ralph Nathaniel Twisleton-Wykeham-Fiennes (; born 22 December 1962) is an English actor, film producer, and director. A Shakespeare interpreter, he first achieved success onstage at the Royal National Theatre. Fiennes's portrayal of Nazi war criminal Amon Göth in Schindler's List (1993) earned him nominations for the Academy Award for Best Supporting Actor and Golden Globe Award for Best Supporting Actor, and he won the BAFTA Award for Best Actor in a Supporting Role. His performance as Count Almásy in The English Patient (1996) garnered him a second Academy Award nomination, for Best Actor, as well as BAFTA and Golden Globe nominations. Fiennes has appeared in a number of ... more on Wikipedia

Ralph Fiennes is ranked on...

#151 of 194 The Hottest Men Over 40 1.2M VOTES The hottest men in Hollywood? Turns out, the older they get, the more we like them! Like fine wines, tweens, and your favori...
#762 of 1,041 Celebrity Death Pool 2020 102.3k VOTES They may be beloved performers, award winners, or game changers, but no matter how famous, you can’t escape death. This cele...
#73 of 1,145 People who voted for Ralph Fiennes... also upvote Lord of the Rings Franchise on The Best Movies of All Time The Best Actors in Film History 2.2M VOTES The best actors ever are ranked here in this list of the best actors in film history. These are the greatest actors ever to ...
#30 of 273 The Greatest British Actors of All Time 289.4k VOTES This list of the greatest British actors of all time has been ranked by fans of the films and TV shows in which these men ha...
#10 of 55 The Best English Actors Working Today 34.2k VOTES There have been plenty of great English actors throughout film history, but which male English actors working today are the ...
#48 of 282 People who voted for Ralph Fiennes... also upvote Lord of the Rings Franchise on The Best Movies of All Time also upvote The Godfather Franchise on The Best Movies of All Time The Best (Male) Actors Working Today 1.5M VOTES The best actors working today include Hollywood legends, Academy Award winners and many of the top up and coming actors in t...
#16 of 101 The Worst Oscar Snubs of All Time 46.7k VOTES Every year, the Academy of Motion Picture Arts and Sciences honors the very best in film - at least as they see it. It seems...
#14 of 115 The Best English Actors of All Time 79.8k VOTES Some of the best actors of all time hail from England, and whether you love these English men for their acting talents or ju...
#15 of 75 People who voted for Ralph Fiennes... Women are 2x more likely to vote for this Famous Actors Who Were Almost James Bond 65.1k VOTES Skyfall once again showcased Daniel Craig as one of the most suave and simultaneously vulnerable Bonds in the history of the...
#4 of 69 Celebrities with the Weirdest Middle Names 35k VOTES Have you always wondered about celebrity middle names? Just like regular people, many celebs and super famous people have we...
#28 of 253 People who voted for Ralph Fiennes... People on the West Coast are 2x more likely to vote for this Actors You Would Watch Read the Phone Book 322.4k VOTES List of actors who you would watch do something as mundane as read the phone book. Some of these guys are leading men, consi...
#268 of 511 Celebrities Nobody Cares About Anymore 3.4M VOTES Some of the greatest actors of all time have, in recent days, turned into a bunch of washed-up hacks that would be somehow b...
#11 of 66 The Best Living English Actors 29.3k VOTES You'd listen to Michael Caine talk all day, right? And surely you'd watch Ian McKellan in just about any movie Hollywood d...
#2 of 23 Who Should Be The Next Professor Xavier? 4k VOTES Now that Patrick Stewart has grown weary of playing Charles Xavier, it’s time to figure out who his replacement is going to ...
#25 of 35 The Best Celebrity Lips (Men) 71.9k VOTES A list of the sexiest male celebrity lips. In Hollywood, a full, kissable pair of lips separates leading men from plain acto...
The Cast of Harry Potter: Where Are They Now? 5M VIEWS When J.K. Rowling’s wildly-popular and bestselling Harry Potter book series was adapted for the screen, fans finally got to ...
Famous People Named Ralph 11.5k VIEWS If your name is Ralph, then you're in some great company. Here's our list of the most famous people named Ralph, including p...
Unicef Goodwill Ambassadors 31.6k VIEWS Unicef Goodwill Ambassadors are often celebrities who travel the world using their fame to promote Unicef in their home coun...
Cast And Crew Describe What It’s Like To Work With Tilda Swinton 3.2k VIEWS Tilda Swinton may be the most versatile actress in Hollywood. The British thespian has played everything from an elderly man...
How to Pronounce Tricky Celebrity Names 16.5k VIEWS Not every celebrity name is as straight-forward as "Tom Hanks" and you won't find him anywhere near this list, whi...
Actors Who Played Multiple Roles in the Same Film 77.2k VIEWS Several famous actors and actresses have played different characters in the same movie. Sometimes actors play characters who...
Celebrities Who Went to Catholic School 26.2k VIEWS You might expect Hollywood A-listers to attend ritzy private academies, but you would be surprised how many famous actors, m...
Ellen Barkin's Loves & Hookups 15.7k VIEWS Who is Ellen Barkin dating? Who Ellen Barkin dated; list of Ellen Barkin loves, ex boyfriends; breakup rumors. The loves, ex...
Every Hollywood Icon Patti Smith Has Dated 211 VIEWS She was an influential member of the 70s punk rock movement, so it’s no surprise there have been a lot of Patti Smith relati...
Actors Who Have Played Hamlet 158.8k VIEWS Hamlet is one of William Shakespeare's most notable tragedies. Many famous actors have portrayed the complicated title chara...

Ralph Fiennes is also found on...