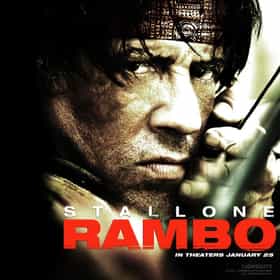 Rambo is a 2008 American-German independent action film directed, co-written by and starring Sylvester Stallone reprising his famous role as veteran John Rambo. It is the fourth installment in the Rambo franchise, twenty years since the previous film Rambo III. This film is dedicated to the memory of Richard Crenna, who played Col. Sam Trautman in the first three films, and who passed of heart failure in 2003. The film is about a former soldier, John Rambo, who is hired by a church pastor to help rescue a group of missionaries who were taken by men from a brutal Burmese military regime. ... more on Wikipedia

The Making Of The Rambo Series Was Plagued With Absolute Insanity 138.1k views Hey, bros! Are you ready to learn a thing or 18 about the homoerotic masterpiece that is the Rambo tetralogy? Of course you ...

Rambo is ranked on...

Rambo is also found on...