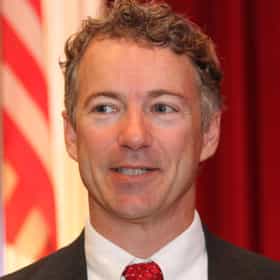 Randal Howard Paul (born January 7, 1963) is an American politician and physician serving as the junior United States Senator from Kentucky since 2011, alongside Majority Leader Mitch McConnell. He is the son of former U.S. Representative Ron Paul of Texas who was a presidential candidate in 1988, 2008 and 2012. Born in Pittsburgh, Pennsylvania, Paul attended Baylor University and is a graduate of the Duke University School of Medicine. Paul began practicing ophthalmology in 1993 in Bowling Green, Kentucky, and established his own clinic in December 2007. In 2010, Paul entered politics by running for a seat in the United States Senate. A Republican, Paul has described himself as a ... more on Wikipedia

Rand Paul is ranked on...

#15 of 114 Famous Politicians You'd Want to Have a Beer With 135.9k VOTES Which likable politicians would be fun to have a few drinks with? Many politicians market themselves as regular folks you'd ...
#36 of 223 People who voted for Rand Paul... People in the Northeast are 3x more likely to vote for this Lying Politicians: The Worst Liars In American Politics 432.7k VOTES Do any politicians tell the truth anymore? Maybe, but you won't find them here. This list has the least trustworthy people i...
#39 of 265 The Most Influential Politicians in American History 161.6k VOTES The most influential politicians in American history, ranked by everyone. Anyone can vote on this list, making these ranking...
#246 of 530 Annoying Celebrities Who Should Just Go Away Already 1.2M VOTES The most annoying celebrities, ranked by entertainment fans themselves. These annoying celebs are obnoxious, overexposed, ...
#14 of 20 The Most Anti-Gay US Politicians 28.8k VOTES Who are the most anti-gay US politicians? The list is a long one, including politicians from both parties (though a maj...
#16 of 51 The Most Important Politicians Of 2019 17.6k VOTES Voting is an integral part of any democracy. And now, you have the power to vote for the individuals you believe to be the m...
#99 of 868 People who voted for Rand Paul... People in the Northeast are 3x more likely to vote for this Celebrity Death Pool 2016 370.1k VOTES Celebrity death pool 2016: Here's a large list of celebrities we think just might die this year. The only certainties in l...
#13 of 15 Which Republican Candidate Do You Trust the Most? 11.5k VOTES There might be no more important quality in a politician than being trustworthy. Does a person say things because they truly...
#6 of 29 Republicans Who Are the Best at Reaching Across the Aisle 3.6k VOTES Due to the fact that American politics lean so heavily on the two party system, few Republicans reach across the aisle to wo...
#9 of 26 The Most Influential People of 2014 6.6k VOTES The most influential people of 2014 changed the world through politics, religion, activism, and entertainment. This list ran...
#6 of 16 2016 Politicians Who Are Best at Evading Questions 3.6k VOTES It's really no surprise that these politicians are good at evading questions. But when it comes to the 2016 candidates for U...
#43 of 99 People who voted for Rand Paul... People in the Central US are 2x more likely to vote for this US Political Figures We Hate the Most: 2013 28.5k VOTES I'm starting this list with the political figures I hate the most, but I'm opening it to voting and to the public. Obviously...
#10 of 14 Family Values: Which GOP Candidates' Families Seem Happy? 1.9k VOTES Family values are among the most important platforms for Republican presidential candidates in 2016 or any election. But equ...
#5 of 19 2016 Campaign Trails You Would Not Want to Be On 3.9k VOTES The 2016 US presidential election season is already underway - that year and a half long grueling process of American politi...
Celebs (Including Republicans) Who Say Trump Is Horrible 29.5k VIEWS President Donald Trump's famous haters have no qualms being open with their disdain for him. Seemingly every day, Trump...
Famous People Whose Last Name Is Paul 8.2k VIEWS Being a fairly common name, it's no surprise there are a lot of famous people with the last name Paul. Do you recognize all ...
Male Celebrities Who Are 5’6" 13.7k VIEWS This list contains examples of male celebs who are 5'6" loosely ranked by fame and popularity. Standing a couple inches...
22 Cringey Times Candidates Lost Control of the Conversation 2.5k VIEWS If the 2016 presidential candidates are good at one thing, it’s being derailed by everything from inanimate objects, to prot...

Rand Paul is also found on...