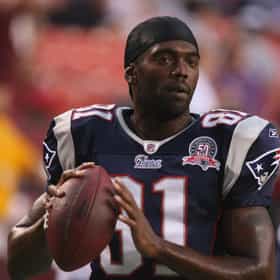 Randy Gene Moss (born February 13, 1977) is a television sports analyst and former American football wide receiver who played 14 seasons in the National Football League (NFL). He holds the NFL single-season touchdown reception record (23 in 2007), the NFL single-season touchdown reception record for a rookie (17 in 1998), and is second on the NFL all-time regular season touchdown reception list with 156. He currently works for ESPN as a studio analyst for their Sunday NFL Countdown and Monday Night Countdown programs. Moss played college football for Marshall University, and twice earned All-America honors. He was drafted by the Minnesota Vikings in the first round of the 1998 NFL ... more on Wikipedia

Randy Moss is ranked on...

Randy Moss is also found on...