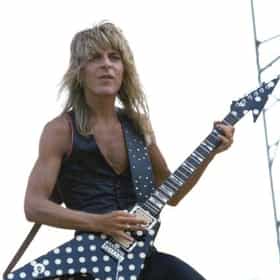 Randall William Rhoads (December 6, 1956 – March 19, 1982) was an American heavy metal guitarist who played with Quiet Riot and Ozzy Osbourne. A devoted student of classical guitar, Rhoads combined his classical music influences with his own heavy metal style. He died in a plane accident while on tour with Osbourne in Florida in 1982. Despite his short career, Rhoads, who was a major influence on neoclassical metal, is cited as an influence by many guitarists. Rhoads is included in several "Greatest Guitarist" lists. ... more on Wikipedia

Randy Rhoads is ranked on...

Randy Rhoads is also found on...