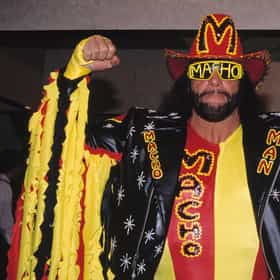 Randall Mario Poffo (November 15, 1952 – May 20, 2011), better known by his ring name Randy Savage, was an American professional wrestler, actor and color commentator best known for his time in the World Wrestling Federation (WWF, now WWE) and later World Championship Wrestling (WCW). His best known nickname was "Macho Man".Savage was described by ESPN's Bill Simmons as "one of the greatest pro wrestlers who ever lived"—a statement echoed by multiple industry performers. He was recognizable by wrestling fans for his distinctively deep and raspy voice, his flamboyant ring attire, intensity exhibited in and out of the ring, his use of "Pomp and Circumstance" ... more on Wikipedia

Randy Savage is ranked on...

Randy Savage is also found on...