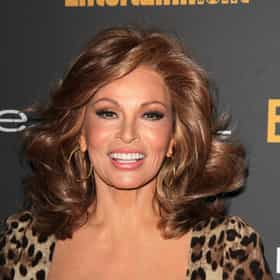 Raquel Welch (born September 5, 1940) is an American actress and singer. She first won attention for her role in Fantastic Voyage (1966), after which she won a contract with 20th Century Fox. They lent her contract to the British studio Hammer Film Productions, for whom she made One Million Years B.C. (1966). Despite having only three lines of dialogue in the film, images of her in the doe-skin bikini which she wore became best-selling posters that turned her into an international sex symbol. She later starred in notable films including Bedazzled (1967), Bandolero! (1968), 100 Rifles (1969), Myra Breckinridge (1970) and Hannie Caulder (1971). She made several television variety ... more on Wikipedia

Raquel Welch is ranked on...

Raquel Welch is also found on...