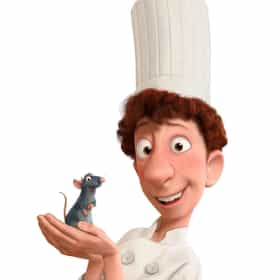 Ratatouille is a 2007 American computer-animated comedy film produced by Pixar Animation Studios and released by Walt Disney Pictures. It is the eighth film produced by Pixar, and was co-written and directed by Brad Bird, who took over from Jan Pinkava in 2005. The title refers to a French dish, "ratatouille", which is served at the end of the film, and is also a play on words about the species of the main character. The film stars the voices of Patton Oswalt as Remy, an anthropomorphic rat who is interested in cooking; Lou Romano as Linguini, a young garbage boy who befriends Remy; Ian Holm as Skinner, the head chef of Auguste Gusteau's restaurant; Janeane Garofalo as ... more on Wikipedia

Adult Moments in Ratatouille You Never Noticed 1.6k votes When you recall the animated flick about the rat chef, chances are you remember the kid-friendly humor. After all, Ratatouil...
The Best 'Ratatouille' Quotes 486 votes Here are the best quotes from Ratatouille. One of the best Pixar movies, the 2007 animated movie centers on a rat who chases...

Ratatouille is ranked on...

Ratatouille is also found on...