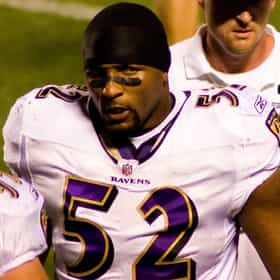 Raymond Anthony Lewis Jr. (born May 15, 1975) is a former American football linebacker who played all of his 17-year professional career for the Baltimore Ravens of the National Football League (NFL). He previously played college football for the University of Miami, and earned All-America honors. Lewis was drafted by the Ravens in the first round of the 1996 NFL Draft, and upon his retirement following the 2012 season, was the last remaining active player from the team's inaugural season. Lewis played middle linebacker his entire career and is considered to be one of the greatest ever to play the position. He was a 13-time Pro Bowler, a 10-time All-Pro, and one of the few players in ... more on Wikipedia

Ray Lewis is ranked on...

Ray Lewis is also found on...