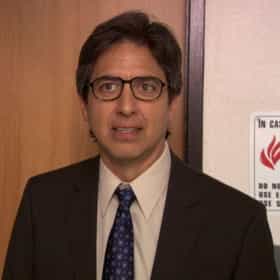 Raymond Albert Romano (born December 21, 1957) is an American stand-up comedian, actor and screenwriter. He is best known for his role on the sitcom Everybody Loves Raymond, for which he received an Emmy Award, and as the voice of Manny in the Ice Age film series. He created and starred in the TNT comedy-drama Men of a Certain Age (2009–11). From 2012 to 2015, Romano had a recurring role as Hank Rizzoli, a love interest of Sarah Braverman in Parenthood, and co-starred in the romantic comedy The Big Sick (2017). Romano portrays as Rick Moreweather in the comedy-drama series Get Shorty. ... more on Wikipedia

Ray Romano is ranked on...

#79 of 403 People who voted for Ray Romano... also upvote Star Trek Franchise on The Greatest Sci-Fi Movies of All Time also upvote Star Trek Franchise on The Best Space Movies The Funniest Stand Up Comedians Of All Time 1M VOTES A ranked list of the best stand up comedians in the history of the art form. First and foremost, all of the people on this l...
#101 of 530 The Best TV Actors of All Time 117k VOTES The greatest TV actors of all time. Some of these actors have been in movies, some of them are even more well known at this ...
#73 of 172 The Celebrities You Most Want To See Play Survivor 49k VOTES Celebrities you want to see play Survivor are the oddest, most high-profile and just plain interesting celebrities who you...
#5 of 14 Who Would Star In 'Goodfellas' If It Were Cast Today? 18k VOTES Martin Scorsese's Goodfellas is a gangster classic. The 1990 film is one of the most influential contributions to ...
#765 of 862 Celebrity Death Pool 2016 370.1k VOTES Celebrity death pool 2016: Here's a large list of celebrities we think just might die this year. The only certainties in l...
#11 of 26 The Best Male Stand Up Comedians of the '90s 3.7k VOTES The best 90s stand up comedians are listed here and ready for you to vote up. So who are the funniest 90s stand up comedians...
#5 of 14 Arguably the Worst Emmy Winners of All Time, Ranked 2.1k VOTES For each astounding, inspiring Emmy-winning actor that makes us laugh, cry, and feel real, human emotions watching their per...
#29 of 50 The Biggest Oscar Snubs of 2018 7k VOTES Academy Award snubs are par for the course when it comes to Oscar season. As what constitutes a snub is somewhat subjective,...
275+ Celebrities with Twin Children 399.6k VIEWS List of celebrities who have twin children, along with the names of the kids, their years of birth, and their other parent...
Every Person Who Has Hosted 'Saturday Night Live' 52.1k VIEWS Live from New York! It's Saturday Night! This is a list of all Saturday Night Live hosts, in reverse order,...
Comedy Central's 100 Greatest Standups of All Time 438.1k VIEWS Comedy Central's one-hundred best stand-up comedians. These funny people have the best standup routines ever. For the full a...
Famous People Who Voiced Cartoon Characters 4.9M VIEWS   Everyone knows that Walt Disney, Mel Blanc, and Dan Castellaneta have provided the voices to iconic cartoon charact...
25+ Comedians Who Were on Star Search 44.6k VIEWS Long before there was American Idol, The X Factor, or America's Got Talent, there was Star Search, hosted by Ed McMahon. Som...
American Stand-Up Comedians: The Best Comics In the USA 170.3k VIEWS American comedians are some of the top rated stand up comedians in the world. These are the greatest stand up comedians this...
#142 of 157 The Best People Who Hosted SNL In The '00s 2.3k VOTES Saturday Night Live went through some big changes in the 2000s - from the 9/11 attacks to the writers strike that shortened ...
100 Highest Paid Celebrities in the World: Power List 2012 30k VIEWS Who are the 100 highest paid celebrities in the world? The celebrity power list of 2012 includes rich and famous people from...
17 People You Forgot Guest Starred on The Office 46k VIEWS Guest stars on The Office weren't an uncommon occurrence. The show went on for a whopping nine seasons (201 episodes), so th...
Celebrity Knicks Fans 224.4k VIEWS This list of celebrity Knicks fans is loosely ranked by fame and popularity. The New York Knicks basketball team has a lot o...
51 Celebrities from Long Island 64.9k VIEWS Stretching from the New York Harbor to the Atlantic ocean, Long Island is an interesting microcosm of the New York experienc...
The Highest Paid Celebrities of 2013 20.2k VIEWS The highest paid celebrities of 2013 range from the top stars in music, movies, television, news and sports, but all have on...
Celebrities Who Turned 60 in 2017 50.6k VIEWS Many celebrities are celebrating their 60th birthdays in 2017, but don't call them senior citizens just yet. These Hollywood...

Ray Romano is also found on...