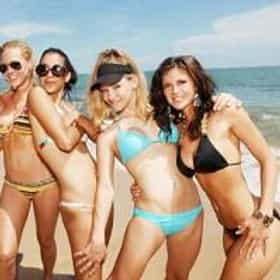 The Challenge is a reality game show on MTV that is spun off from the network's two reality shows, The Real World and the now cancelled Road Rules. It features alumni from these two shows, in addition to first-time cast members called 'Fresh Meat' and alumni from Are You the One?, competing against one another for a cash prize. The Challenge is currently hosted by T. J. Lavin. The series premiered on June 1, 1998. The title of the show was originally Road Rules: All Stars before it was renamed Real World/Road Rules Challenge by the show's 2nd season, then later abridged to simply The Challenge by the show's 19th season. The series initially used no hosts but instead a former cast ... more on Wikipedia

lists about The Challenge

The Challenge is ranked on...

#79 of 151 The Best TV Shows That Returned In 2019 58.2k VOTES UPDATED: Check out The Best TV Shows Returning In 2020! The best TV shows returning in 2019 are a mix of long-awaited...
#13 of 62 People who voted for The Challenge... also upvote Harry Potter Franchise on The Best Movies of All Time also upvote Fast and the Furious Franchise on The Best Car Movies The Best MTV Original Shows 31.1k VOTES The best MTV original shows include reality shows, music series, comedies, and dramas, as well as animated series. MTV start...
#57 of 254 The Best Reality TV Shows Ever 168.1k VOTES This is a list of the best reality TV shows on television, the most (often shamefully) addictive reality TV series. From g...
#4 of 31 What to Watch If You Love 'Survivor' 205 VOTES Survivor is one of the first reality competition shows to work in the United States, and its success is evidenced ...
#5 of 60 The Best Reality TV Shows In 2019 2.9k VOTES UPDATED: Check out The Best Reality TV Shows of 2020! Not only are there lots of new reality TV shows premiering...
#2 of 22 The Best Current MTV Shows 16.3k VOTES Wondering what to watch on MTV? This list of the best MTV shows on now in 2019 has you covered. Once primarily known for bro...
#33 of 63 The Best MTV TV Shows 78.3k VOTES MTV used to be all about the music, but now it's turned into a reality television haven. Back in the day, music videos and B...
#22 of 25 The Best 1990s Reality Shows 2.2k VOTES These are the best 1990s reality shows ranked from best to worst by user votes. There were some great 90s reality programs t...