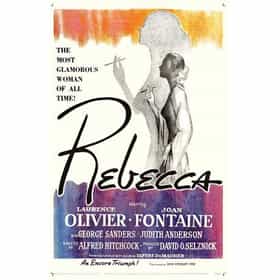 Rebecca is a 1940 American psychological thriller-drama film. Directed by Alfred Hitchcock, it was his first American project, and his first film produced under contract with David O. Selznick. The film's screenplay was a version by Joan Harrison and Robert E. Sherwood based on Philip MacDonald and Michael Hogan's adaptation of Daphne du Maurier's 1938 novel Rebecca. The film was produced by Selznick and stars Laurence Olivier as the brooding aristocratic widower Maxim de Winter, Joan Fontaine as the young woman who becomes his second wife, and Judith Anderson as the stern housekeeper, Mrs. Danvers. ... more on Wikipedia

Rebecca is ranked on...

#42 of 250 The Best Psychological Thrillers of All Time 481.8k VOTES A list of the best psychological thrillers of all time, ranked by fans who may or may not be trying to mess with your head! ...
#277 of 6,106 The Best Movies Of All Time 5.7M VOTES These are the best movies of all time, ranked by movie experts and film fans alike. What are the greatest movies in cinema h...
#356 of 410 The Best Rainy Day Movies 178k VOTES For many, rainy days are no fun—but it doesn't have to be that way. A great way to spend such days is watching movies, ...
#283 of 804 The Greatest Chick Flicks Ever Made 421.9k VOTES Here's a list of the greatest chick flicks ever, ranked by fans and casual critics like you. The best girl movies are those ...
#54 of 111 The Best Movies That Pass the Bechdel Test 8.7k VOTES Few movie cliches are more common than the female best friend. What's she like? What are her interests and life goals? Who k...
#5 of 75 The Greatest Classic Romance Movies 6.5k VOTES Who wouldn't swoon over a romantic tale of two people coming together against all odds to fall in love? These classic r...
#70 of 105 The Best Valentine's Day Movies 5.2k VOTES The absolute best movies for Valentine’s Day, ranked from the most popular to the least based on the amount of votes cast fo...
#45 of 50 The Worst Best Picture-Winning Films 35.8k VOTES These are the absolute worst Best Picture movies ever made, ranked by the Ranker community. This list is made up of best pic...
#6 of 42 All Alfred Hitchcock Cameos 123 VOTES Alfred Hitchcock was making cameo appearances in his movies way before Stan Lee made it cool (and Lee obviously didn't direc...
#13 of 52 The Best Gothic Horror Movies 6.3k VOTES Gothic horror (also commonly referred to as gothic fiction) is a genre of literature or film that typically combines horror,...
#1 of 253 The Best Movies of 1940 3.8k VOTES List of the best movies of 1940, with movie trailers when available. These top movies of 1940 are listed by popularity, so...
#3 of 48 The Best Romance Movies of the 1940s 1.3k VOTES With this list of 1940s romance movies ranked from best to worst, you can travel back to a bygone era of cinematic romance. ...
#17 of 49 The Best Classic Thriller Movies, Ranked 1.2k VOTES This list contains information on the best classic thriller movies, ranked from best to worst by user votes. The best classi...
#1 of 41 The Best Joan Fontaine Movies 694 VOTES List of the best Joan Fontaine movies, ranked best to worst with movie trailers when available. Joan Fontaine's highest gros...

Rebecca is also found on...