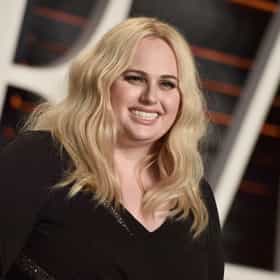 Rebel Melanie Elizabeth Wilson (born 2 March 1980) is an Australian actress, writer, and producer. After graduating from the Australian Theatre for Young People in 2003, she began appearing as Toula on the Special Broadcasting Service (SBS) comedy series Pizza and the sketch comedy series The Wedge. In 2008, Wilson wrote, produced and starred in the musical comedy series Bogan Pride. The following year, she won the Tropfest best actress award for her role in Bargain and made a guest appearance in City Homicide. Shortly after moving to the United States, Wilson was cast as Brynn in the feature film Bridesmaids. Wilson also appeared in A Few Best Men, What to Expect When You're Expecting ... more on Wikipedia

Rebel Wilson is ranked on...

#57 of 297 People who voted for Rebel Wilson... People under 30 are 2x more likely to vote for this People in the Central US are 2x more likely to vote for this The Funniest Female Comedians of All Time 256.3k VOTES The funniest female comedians star on our favorite sitcoms, perform standup at the top comedy clubs and best of all, make us...
#7 of 15 Who Would Star In ‘Friends’ If It Were Made Today? 11.9k VOTES In the age of streaming and peak television, Friends is one '90s show that everyone still knows and loves. Forget ...
#80 of 100 The 100+ Greatest Film Actresses Of The 2010s 6.9k VOTES The 2010s provided some of the best films of all time. That wouldn’t have been possible if it wasn't for the amazing work of...
#14 of 15 Celeb Women Who Are Way Older Than You Think 261.3k VOTES Did these age-defying women find the fountain of youth? How is it possible that Halle Berry is over 50 and Katie Couric...
#15 of 32 The Best Female Stand Up Comedians of the 2010s 1.1k VOTES The best 2010s stand up comedians who just so happen to be born female are listed here awaiting your votes. The best female ...
#50 of 119 The Best Celebrity Partners to Have on a Game Show 91k VOTES Choosing the right partner in life is important. Choosing the right celebrity partner to have on a game show is way, way, ...
#6 of 44 The Biggest Breakthrough Stars of 2012 3.3k VOTES The hottest breakthrough celebrities of 2012 include a wide variety of actors, actresses, musicians and TV stars who, for wh...
Famous People Whose Last Name Is Wilson 17k VIEWS Being a fairly common name, it's no surprise there are a lot of famous people with the last name Wilson. Do you recognize al...
15 Celebrities Who Totally Lied About Their Age 38k VIEWS Given that they're living under the intense scrutiny of the public eye, it's only natural that some famous people have chose...
24 Photos Of Celebrities With And Without Their Makeup 7.3M VIEWS Famous figures always look flawless on the cover of magazines or in close-ups. Ever wonder what celebrities look like withou...
#28 of 35 The Funniest Australian Comedians of All Time 4k VOTES This list contains information about the best Australian comedians, loosely ranked by user votes. The best Australian come...
#37 of 43 Dreamcasting Celebrities We Want To See On Lip Synch Battle 133 VOTES This is a list of celebrities we would love to see compete on Lip Sync Battle. Some celebrities who should be on Lip Sync Ba...
The Most Successful Obese Americans 651.2k VIEWS The most successful obese Americans include men and women who despite being overweight, have found mainstream success. These...
Celebrities Who Live in Los Feliz 290.6k VIEWS This is a list of celebrities who live in Los Feliz, loosely ranked by fame and popularity. Los Feliz is a popular hillside ...

Rebel Wilson is also found on...