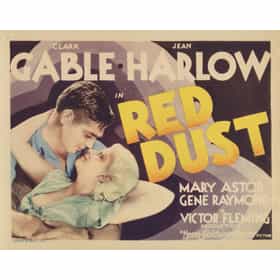 Red Dust is a 1932 American romantic drama film directed by Victor Fleming and starring Clark Gable, Jean Harlow and Mary Astor. The film is based on the 1928 play of the same name by Wilson Collison, and was adapted for the screen by John Mahin. Red Dust is the second of six movies Gable and Harlow made together, and was produced during the Pre-Code era of Hollywood. More than twenty years later, Gable would star in a remake, Mogambo, with Ava Gardner starring in a variation on the Harlow role and Grace Kelly playing a part similar to one portrayed by Mary Astor in Red Dust. The film provides a view into the French colonial rubber business. This includes scenes of rubber trees being ... more on Wikipedia

Red Dust is ranked on...

#14 of 138 The Best Pre-Code Movies 2.1k VOTES Here it is, ladies and gents, a list of all the best pre-code movies of all time, many of which are streaming on Netflix and...
#1 of 28 The Best Jean Harlow Movies 777 VOTES List of the best Jean Harlow movies, ranked best to worst with movie trailers when available. Jean Harlow's highest grossing...

Red Dust is also found on...