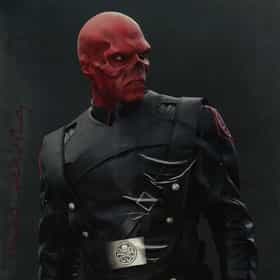 The Best Red Skull Storylines in Comics 8 votes Here are the best storylines to feature the Red Skull. When it comes to villains, you don't have to look much further than t...

Red Skull is ranked on...

#10 of 110 People who voted for Red Skull... also upvote Captain America on The Best Comic Book Superheroes of All Time also upvote Hank Pym on The Greatest Marvel Avengers Characters of All Time The Greatest Marvel Villains & Enemies Ever 405.8k VOTES The best Marvel villains are the men and women (not to mention any aliens, robots, and even siblings of heroes) at the root ...
#61 of 194 The Best Characters In The Marvel Cinematic Universe 545.8k VOTES Since the debut of Iron Man in 2008, the Marvel Cinematic Universe has been delivering top-notch superhero movies with some ...
#8 of 80 The Greatest Avengers Villains of All Time 64.5k VOTES The Hulk, Iron Man, and Thor had been fighting crime separately in the pages of Marvel Comics, each having their own share o...
#12 of 17 The Spookiest Villains in Comics 128.8k VOTES Who needs the likes of Michael Myers, Freddie Krueger, and Jason when we have villains in comics that are just as scary, if ...
#27 of 65 The Most Notorious Skeleton Characters of All Time 24.5k VOTES Animated human skeletons have been used as a personification of death since the Middle Ages. From Jack Skellington to Skelet...
#7 of 47 The Best Villains In The Marvel Cinematic Universe 8.8k VOTES The Marvel Cinematic Universe may have its share of awesome heroes, but for every great hero, there’s an equally awesome vil...
#19 of 28 The Most Terrifying & Scariest Villains In Comics 58.3k VOTES Does the Scarecrow bring the fear out of you? Does the thought of Venom being around you make you cringe? Does Batman's Vict...
#19 of 31 The Best Red Characters 902 VOTES We’re ranking the best red characters of all time. From Daredevil to Deadpool, Mario and even Optimus Prime, this list ...
#3 of 14 The Many Fake-Out Demises Of The Marvel Cinematic Universe (Ranked By How Much You Believed They Were Gone) 1.3k VOTES The Marvel Cinematic Universe is already dozens of films deep, and the franchise has certainly experienced its fair sha...
#5 of 20 The Best Archenemies in Marvel Comics 10.9k VOTES Archenemy, arch-rival, arch-nemesis whatever you want to call it, it's personal. The yin to the yang, the polar opposite, th...
#1 of 50 The Best Captain America Villains Ever 5k VOTES List of Captain America's most notorious baddies, ranked by the fans. Captain America is one of Marvel's first superheroes h...
#7 of 51 The Best Black Widow Villains 3.3k VOTES Black Widow has had quite the history, and to this day we still don't know most of it. She's an ex-Russian spy who (dependin...
12 Comic Book Characters With Tragic Backstories Who We Refuse To Feel Sorry For Them 7.5k VIEWS Comic books are brimming with tragic origin stories. Apparently if you didn't have your parents murdered in front of you, yo...
Your Favorite Marvel Characters: Where Are They Now? 1.3M VIEWS Marvel Comics has a celebrated 75+ year history in the comic book industry, having brought readers characters that have surv...
A Surprising Amount Of Marvel Characters Have Run For Political Office 2.6k VIEWS Online controversies prove not everyone is comfortable with the Marvel Comics version of politics, but the publisher has put...