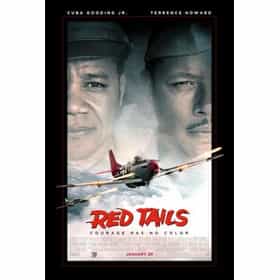 Red Tails is a 2012 American film directed by Anthony Hemingway in his feature film directorial debut, and starring Terrence Howard and Cuba Gooding Jr. The film is about the Tuskegee Airmen, a group of African-American United States Army Air Forces servicemen during WWII. The characters in the film are fictional, although based on real individuals. The film was produced by Lucasfilm and released by 20th Century Fox. John Ridley wrote the screenplay. Additional material was shot the following year with executive producer George Lucas as director and Aaron McGruder as writer of the reshoots. ... more on Wikipedia

Red Tails is ranked on...

#169 of 379 The 50+ Best War Movies Ever Made, Ranked 513.1k VOTES From classics like Saving Private Ryan to newer entries like Dunkirk and 1917, this list ranks the best movies about war, ba...
#486 of 599 The Greatest Epic Movies Ever Made 279.7k VOTES Need some movie ideas? Check out this list of the best epic films of all time, which encompasses some of the best movie...
#162 of 722 The Best Black Movies Ever Made, Ranked 665.9k VOTES The best black movies are favorites that explore African-American culture and themes. This list is ranked by film fans, many...
#87 of 221 The Greatest World War II Movies of All Time 367.8k VOTES The best World War 2 movies remind us that perhaps no single event has had a greater impact on the future of filmmaking than...
#24 of 33 The Most Inspirational Black Movies 2.4k VOTES Watching a movie about someone succeed in achieving a lofty goal can lift your spirits and encourage you to keep trying in...
#24 of 39 Great Movies About Racism Against Black People 3.7k VOTES Movies about racism are some of the most emotional and dramatic films to ever hit the silver screen. The top black racism mo...
#171 of 304 The Best Military Movies Ever Made 125.2k VOTES Good military films give civilians a taste of what our troops go through on the battlefield and throughout their daily lives...
#67 of 88 The Best Airplane Movies 4.4k VOTES A list of all the best airplanes movies ever made, many of which are streaming on Amazon Prime and Netflix. This...
#4 of 17 The Best Black War Movies 156 VOTES The cinema has told several different stories featuring black soldiers fighting in wars, dating all the way back to Home of ...
#18 of 51 The Best PG-13 History Movies 604 VOTES List of PG-13 history movies, ranked from best to worst with movie trailers when available. This list takes the best PG-13 h...
#10 of 20 20 Films to Show Your Kids to Get Them into War Movies 263 VOTES As classic cinematic masterpieces - like Saving Private Ryan and Apocalypse Now - are war movies, you probably wan...
#19 of 38 The Best Movies About Black History 268 VOTES Black history is extremely important in the United States. There are a number of award winning movies about black history th...
#9 of 39 The Best Method Man Movies 401 VOTES List of the best Method Man movies, ranked best to worst with movie trailers when available. Method Man's highest grossing m...
#7 of 7 The Best Movies Directed by George Lucas 816 VOTES List of all movies directed by George Lucas ranked from best to worst with photos. Films directed by George Lucas are listed...
#14 of 27 Best David Oyelowo Movies 63 VOTES List of the best David Oyelowo movies, ranked best to worst with movie trailers when available. David Oyelowo started his ac...

Red Tails is also found on...