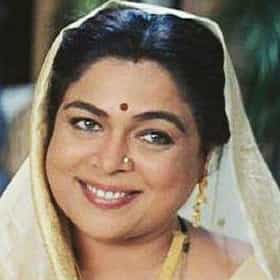 Reema Lagoo (born Nayan Bhadbhade) (21 June 1958 – 18 May 2017) was an Indian theatre and screen actress known for her work in Hindi and Marathi cinema. She began her acting career in the Marathi theatre., after which she became a household name for playing motherly roles in the 1990s and early 2000s. She was immortalized and became a household name after her role in 90s classic TV comedy, Shriman Shrimati. Her roles in Shriman Shrimati as Kokila Kulkarni and as Devaki Verma starring opposite Supriya Pilgaonkar in Tu Tu Main Main gave her household stardom. ... more on Wikipedia

Reema Lagoo is also found on...